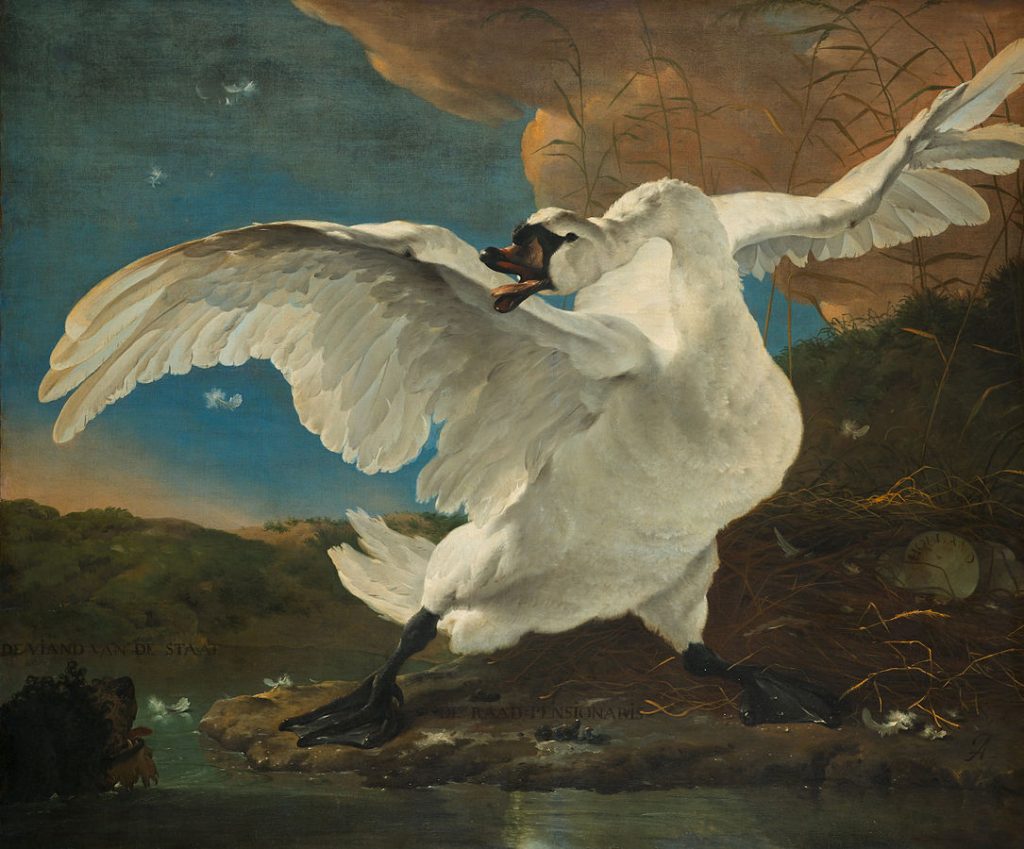 Jacques Arcadelt’s ‘Il bianco e dolce cigno’ is a suitable place to start a series such as ‘Madrigal of the Week’. Published in 1539, it is not an early madrigal by any means, but it is (possibly) the first explicit/erotic madrigal in a tradition that would continue for the next century.

Using the euphemism of death for orgasm, the speaker of the text compares the swans actual death against his euphemistic one. Although the expression ‘Swansong’ only came into being in the eighteenth century, the legend of the mute swan dates back to antiquity. Silent throughout its life, the mute swan only sings in the final moments before its death. Despite being completely untrue, as a poetic image it is certainly very powerful and has remained so to the present day.

The first two lines introduce us to the legend of the mute swan, who sings as he dies; and the speaker, weeping, reaches the end of his life, in other words “death”. Note also the auditory metaphor ‘weeping’. The dual meaning for death is revealed in the next three lines; the speaker and the swan have strange and different fates: the swan dies inconsolable, or actually dies, whilst the speaker dies ‘blessed’. To die blessed may actually have that literal meaning, especially in the Roman Catholic Italy, but in this case does not! Instead, it is a death full of joy and desire. So much so, that if in dying the speaker were to ‘feel no other pain’, as the swan does, he would ‘die’ happily a thousand times a day.

In the opening phrase; only three voices sing. The innermost, has arguably the most interesting part, with the lowest a close second. The highest voice has the simplest of all. A fourth voice enters on the words ‘et io’ (and I) and from then on all voices sing together; this is a simple form of word painting, the whole ensemble together, distinguished from the ‘swan’.

Texturally, all the voices move more or less together in all but two significant places. First, on the word ‘beato’; the break in the texture adds a flourish to emphasise the word ‘blessed’. Then, at the end, the voices all sing in their own time, imitating each other to emphasise the repetition of ‘mille mort’ il di’ (thousand times a day). Overall, the music and its harmonies are simple and allow the words to speak for themselves. This proved popular and the madrigal was a favourite of the sixteenth century. Yet, the form would develop to more expressive heights throughout the sixteenth century.

Jacques Arcadelt was most likely born in Liège (modern day Belgium) in c. 1504. In the 1530s, whilst resident in Florence, he composed many madrigals, and by 1539 had published four books of madrigals. He went on to serve in Rome in the papal chapel in the 1540s before moving to France in the service of the cardinal of Lorraine. By 1557 he was associated with the royal chapel under Henry II and Charles IX. His madrigal writing is, however, associated mostly strongly with his time in Florence.